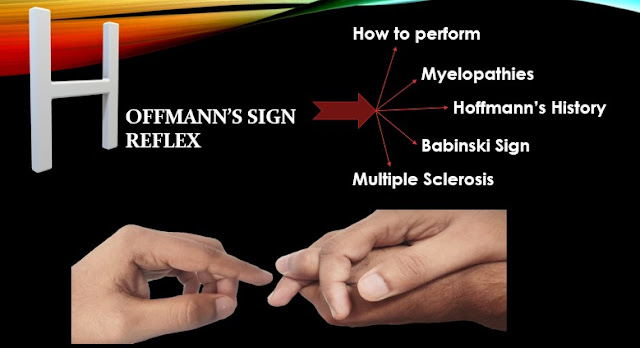 Hoffmann’s sign is a test for pathological disorder in upper motor neuron reflex as seen in cervical myelopathy when the spinal cord in the cervical spine gets compressed and chances are that the patient will exhibit pathological reflexes.

It clearly demonstrates the lesion in the pyramidal tract even with asymmetric clinical findings along with presence of different reflexes.

According to Grivalja et.al from 2015 it has a sensitivity of 59 and a specificity of 49%.

Well, it is worth mentioning that it can be demonstrated in normal patient too.

It is one of indicative of hyperreflexia. It is also found in patients with hyperthyroidism anxiety another clinical and the pathological condition associated with deep tendon reflexes.

Furthermore, in clinical practice, hyperthyroidism can be asymmetric cause of hyperreflexia which could be supposed to cause bilateral findings whereas in some cases of damage to the brain as in the case of tumour in the brain can cause unilateral findings. Thus, it is concluded that the unilateral Hoffmann sign is more specific to structural disease in patients.

Hoffmann’s sign is also used to find cervical spinal disease in comparison to Babinski sign, to check the severe neurological deficit and surgically treated patients for cervical myelopathy, it is most preferred, as it is present in almost all cases and is most likely to occur in patients which severe neurological disorder.

Hoffmann’s sign is found to be a good indicative marker for different hidden cervical cord compression in a patient with lumbar spine disease without symptoms.

This reflex of abduction of thumb and flexion of the index finger, when the middle finger is strike aka Hoffmann's Reflex is attributed to German neurologist Johann Hoffmann (1857-1919).

It was used to demonstrate the lesion or disorder in the corticospinal tract.

In 1916, Keyser reported a series of 35 neurological cases demonstrating the Hoffmann's Reflex but he could not find any reference to Hoffmann's contribution.

Later on, one of Hoffmann's resident Hons Curschmann (1875-1942) mentioned the reflex in his footnote about neurological disorder in a 10-year-old child having acute nephritis. In this, there was diminished biceps and triceps reflex bilaterally and also find negative Hoffmann's phenomenon bilaterally. In his footnote he further explained 'The Hoffmann's Reflex' that the examiner has to hold the slightly bend finger of the patient between thumb and index finger and when snapping in the nail of one of those fingers shows quick flexion of the same finger or in all finger.

Wartenberg, the neurologist well known for his Wartenberg sign/ Wartenberg syndrome and several other neurological disorder theories. Also stated that Hoffmann's sign is based on the physiological mechanism of muscle stretch reflex. The flexor compartment of finger muscles contracts those muscles when they are being rapidly stretched.

Hoffmann sign is associated with the lesion and disorder in the corticospinal tract. And hence it is useful in the detection of several myelopathies.

Myelopathy is a neurological deficit associated with spinal cord injury. It is of a different type.

In human most common myelopathy is Cervical Spondylitis Myelopathy. It is mainly caused by arthritic changes in the cervical region of the spinal cord which is also a result of narrowing of the spinal canal known as Spinal Stenosis.

These Myelopathies are mainly diagnosed by clinical exam findings. As Myelopathies is a clinical syndrome so it can be a result of multiple pathologies. Because of this, differential diagnosis is a must in these conditions.

The diagnostic process of most of the myelopathies follows Magnetic Resonance Imaging (MRI), X-ray and Computer tomography. Angiography is used in case of Vascular Myelopathy. Sometimes Transcranial Magnetic Stimulation is used to check the severity of myelopathies.

To add on this Hoffmann’s Sign helps medical practitioner to detect the Cervical Spondylitis Myelopathy for further clinical diagnosis.

Multiple sclerosis is a demyelinating disorder of neurons in which neuron loses its insulating covering sheath due to its own body immune response which results in several neurological deficit.

Multiple Sclerosis is associated with different tracts in the body including corticospinal tract whose lesion are demonstrated by Hoffmann’s sign.

Moreover, the treatment and prognosis of myelopathies can be done by specific treatment as per the cause which may also present with myelopathy.

And as discussed above the most common form of myelopathy is secondary to degeneration of the cervical spine, the Hoffmann’s Sign provide aid for its treatment and prognosis.

Hoffmann’s sign can be present in normal patient and is more commonly found in a patient with normal hyperreflexia.

It shows pathological disorder when it is positive along with the presence of asymmetric or acute onset of reflex.

Hoffmann sign is a deep tendon reflex which follows the monosynaptic reflex pathway in lamina IX of the spinal cord.

Whereas Positive Babinski sign demonstrates pathological condition in the spinal cord and brain.

It is not demonstrated in a normal patient but sometimes the term ‘Negative Babinski sign’ is used for them.

Babinski sign is commonly known as plantar reflex. It does not flow monosynaptic pathway rather it has complicated synaptic transmission.

Hoffmann’s Sign is one of the basic reflexes to trace the lesion in upper motor lesion especially associated with corticospinal tract innervating the upper extremities. It is also known as finger flexor reflex which shows quick adduction of thumb and flexion of other fingers when the middle finger of the same hand is flicked on the nail.

It is more often confused with Babinski Sign which also a neurological reflex involving corticospinal tract.

It does not always show pathological disorder as it is also present in the normal person. Whereas it may indicate some of the upper motor lesion which requires further clinical lab testing.

Popular posts from this blog